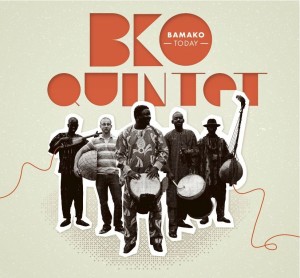 This gathering of five established Malian artists provides a journey into the heart of the contemporary Mali.

Ibrahima Sarr, powerful percussionist, masters with ease the sounds of the djembe drum and has traveled the world alongside Oumou Sangare.  Fassara Sacko whose voice takes you from aback, differs from other griots in traditional celebrations. Yoro Sidibé’s grandson, Nfali Diakité , with his infernal « tournes », also sings and plays his donsongoni in animist ceremonies celebrated by his peers.  Abdoulaye Kone, master of djelingoni develops a unique psychedelic style.  He is the descendant of Djeli Baba Sissoko, and has been solicited before this quintet by great artists like Tiken Jah Kafoly, Salif Keita to tour outside of the Mali borders.  Finally Aymeric Krol, experienced of internationals stages grooves on its strange drums. For the past 10 years he often settled in Bamako where he worked with several artists. Today, his encounter with Ibrahima Sarr gives birth to the project: BKO Quintet.

The first EP recorded  live  in January 2012 in Bamako in the popular district of Medina Coura.  In the new edition, some tracks recorded in January 2013 have been added to the EP. The present arises from the past, this « inhabited » music is far from the « World » standardized sound.